Hugh Sidey Scholarship in Print Journalism Sends Diwate Behind the Scenes in D.C. 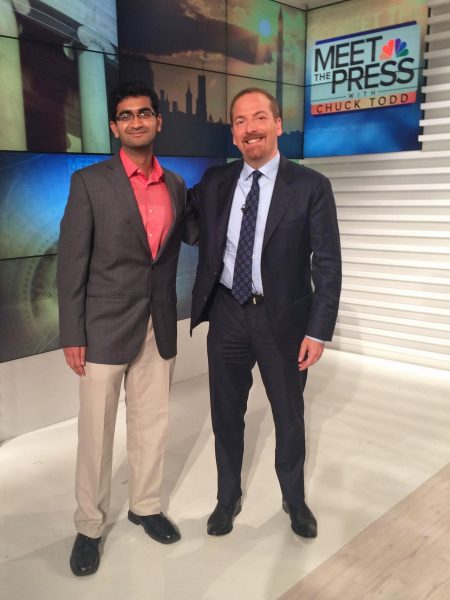 The Hugh S. Sidey Scholarship in Print Journalism at the Greenlee School of Journalism and Communication was established in 2006 at Iowa State University, Mr. Sidey’s alma mater, by the White House Historical Association and Mr. David M. Rubenstein. To keep alive Hugh Sidey’s legacy of reporting on the presidency, the scholarship supports aspiring print journalists at the Greenlee School.

Varad Diwate, a senior majoring in journalism and mass communication and minoring in political science, was the 2015 winner of the Hugh S. Sidey Scholarship in Print Journalism and the award’s first international recipient.

“I am interested in how journalism and politics intersect,” Diwate said. “I found that the topic of the essay was just looking for that intersection.”

Since childhood, Diwate has incorporated politics into his life, both in his native India and now in Ames. “It gives me a broad perspective, looking at different issues,” Diwate said.

He develops those perspectives through his involvement on campus. Diwate works as a reporter for the Iowa State Daily, feature editor for Ethos magazine, community adviser for the ISU Department of Residence, international student ambassador and staff member for Veritas, a new student political magazine.

“My general interest is in reading and knowing more about the social and political worlds,” he explained.

Dr. Michael Bugeja, director of Greenlee School, said it was a very close competition for this year’s Sidey Scholar selection, but the judges are proud of choosing Diwate.

“In the end, it seemed he did more research and not only wrote well but had some prominent research that really made a case for Hugh Sidey’s impact on society,” Bugeja said. “He knew his subject, and he researched it to inform people who read it. I was so informed reading his work.”

Diwate received the $5,000 Hugh Sidey Scholarship, as well as an all-expenses-paid trip to Washington, D.C. His trip involved visits to several media outlets and attending a briefing in the White House Press Briefing Room, which he says was a highlight. Following the briefing he was able to meet with White House correspondents from various news outlets and get their perspectives on covering the presidency.

“I found the experience to be a unique learning opportunity,” Diwate explained. “You read from those sources, you listen to them, you watch them. It was a different experience to go behind the scenes and see how they function.”

Diwate’s story is featured on the White House Historical Association’s website, and will continue with updates throughout his career. He hopes to someday live in a city with a political capital or political institution, and plans to report on cultural, political and economic news.