INDIANAPOLIS—The Iowa State Daily, the independent student newspaper of Iowa State University, has won the top award of Best All-Around Student Newspaper in the national finals of the Society of Professional Journalists 2015 Mark of Excellence Awards, beating finalists The Daily Mississippian (Univ. of Mississippi) and the Daily Bruin (UCLA).

"Being recognized by SPJ as the nation’s Best All-Around Student Newspaper is a remarkable accomplishment," says Lawrence Cunningham, general manager and publisher of the Daily. "Like many media companies, we are in the middle of a transition period and this award speaks to the significant effort by our student and professional staff members to demand excellence as we continue to evolve our business model."

Former Editor Stephen Koenigsfeld’s March 6, 2015 issue and Danielle Ferguson’s Oct. 9, 2015 and Dec. 4, 2015 editions were submitted for the honor. Koenigsfeld and Ferguson are now both graduates of the Greenlee School — he works on the staff of the Marshalltown Times-Republican and she reports for the Sioux Falls Argus Leader.

Incoming Daily Editor Emily Barske’s “Our Way of Life” was a national finalist in the feature writing category.

This isn’t the first time the Daily has been named the best student newspaper in the country; in 2007 the Daily also claimed the national title.

Cunningham and ISD Editorial Adviser Mark Witherspoon both praised the Daily’s student and professional staffs for their dedication to providing a high-quality publication to the ISU community.

"We have been an excellent newspaper, at least in the eyes of SPJ, for 10 years now," says ISD Editorial Adviser Mark Witherspoon. "I think excellent newspapers evolve with the times, and I think we’ve done a good job of doing that, especially in the last few years."

Since taking over as general manager in late 2014, Cunningham, a 2002 Iowa State alumnus, has transitioned what was once the Iowa State Daily to the Iowa State Daily Media Group, which allows the organization to take on ventures outside of the traditional newspaper. Last semester, they introduced a creative services agency, named the Model Farm, and have more innovative endeavors coming in the near future, Cunningham says. The fact that the Daily’s award comes amid the ISD Media Group’s evolution beyond its flagship student newspaper speaks to the quality of its student employees, Cunningham and Witherspoon agree. 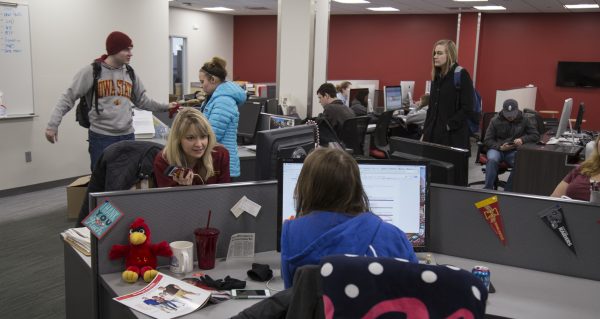 "This type of recognition reinforces the value of an education at Iowa State University and the work faculty and staff at the Greenlee School are doing to prepare our students for success in the ever-changing professional media landscape," Cunningham says.

Michael Bugeja, Greenlee School director, praised the students who dedicate their time and energy to keeping the ISU campus and town informed. He also praised Witherspoon and Cunningham for the counsel and support of reporters, designers, advertisers and editors.

“The Greenlee School respects the independent status of the Daily,” he said, adding, “but as most of the staff are our majors, or who have taken classes at the Greenlee School, we delight in their national awards.”

Bugeja also credited the Greenlee faculty and staff for their support of the newspaper in class and advising sessions.

National Mark of Excellence Award winners are chosen from the category winners in each of SPJ’s 12 regions, and the awards are judged by journalism professionals with at least three years of experience. Lists of regional winners can be found in SPJ News.

SPJ will recognize first-place national winners at the Student Union event during Excellence in Journalism 2016, Sept. 18-20 in New Orleans.

Judges were directed to choose only those entries they considered outstanding work worthy of a national honor. If the judges determined none of the entries rose to this level of excellence, no award was given. Any category not listed has no winner.

School divisions are based on student enrollment, which includes both graduate and undergraduate enrollment: Large schools have 10,000+ students and small have fewer than 10,000 students.