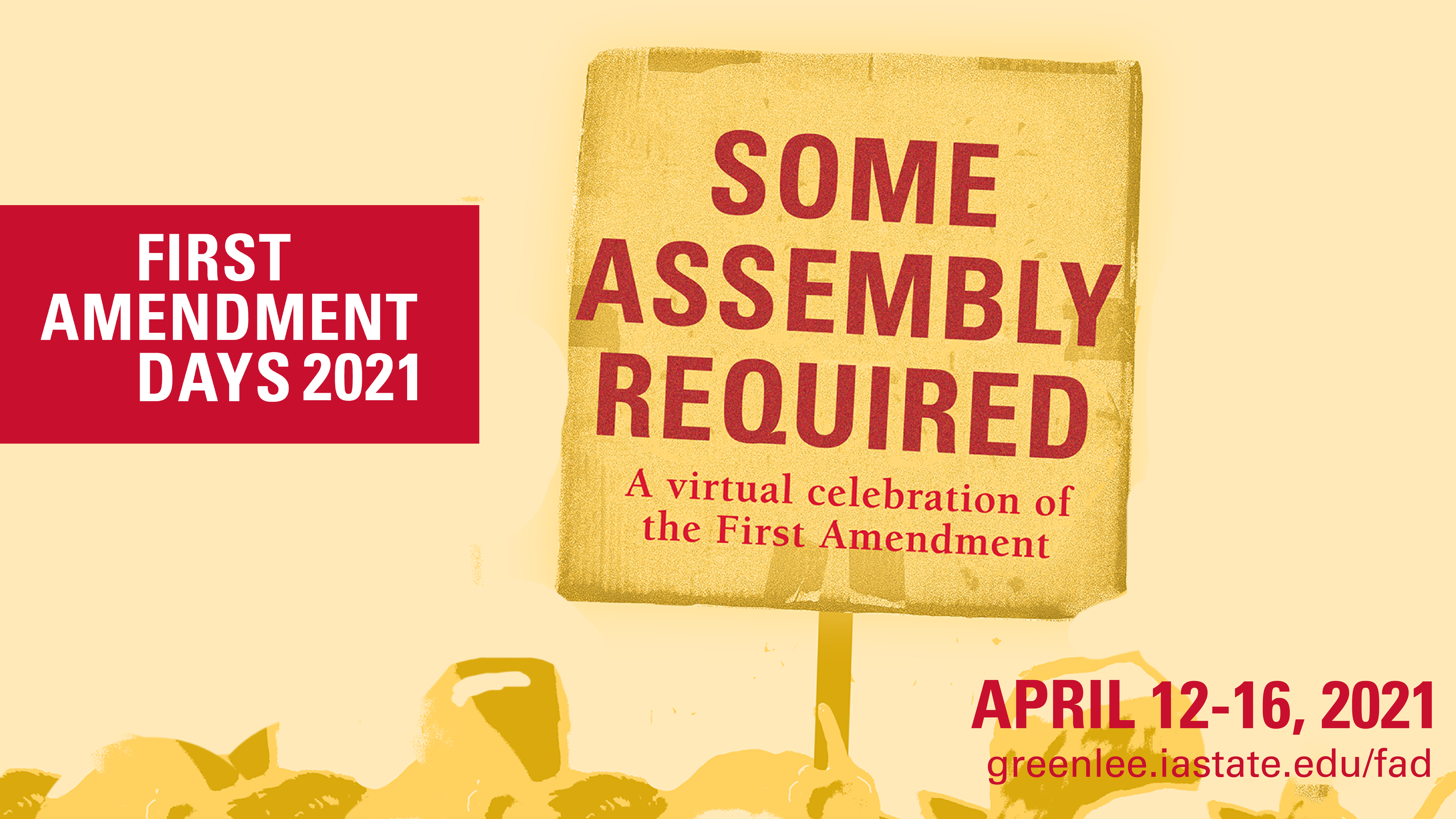 Celebrate your First Amendment freedoms — religion, speech, press, assembly and petition — during First Amendment Days, April 12-16, 2021. The 2021 theme is “Some Assembly Required” with a special focus on protest. This year all events are virtual. See the complete schedule.

First Amendment Days is a weeklong celebration of our First Amendment freedoms – religion, speech, press, assembly, petition. A diverse assortment of speakers, events and activities are offered on campus every spring as a creative way to engage students and the entire Iowa State community to better understand the power of free expression. First Amendment Days is also designed to provide opportunities to exercise our five freedoms.

Now in its 19th year, First Amendment Days is the longest-running continual student-led First Amendment celebration at any university in the U.S. The celebration is organized by the First Amendment Committee, which is made up of members of the Greenlee School of Journalism and Communication and the Iowa State Daily Media Group.

Join us for three evening lectures with nationally recognized First Amendment experts. All lectures are virtual, free and open to the public. See the links below for more information about each event. 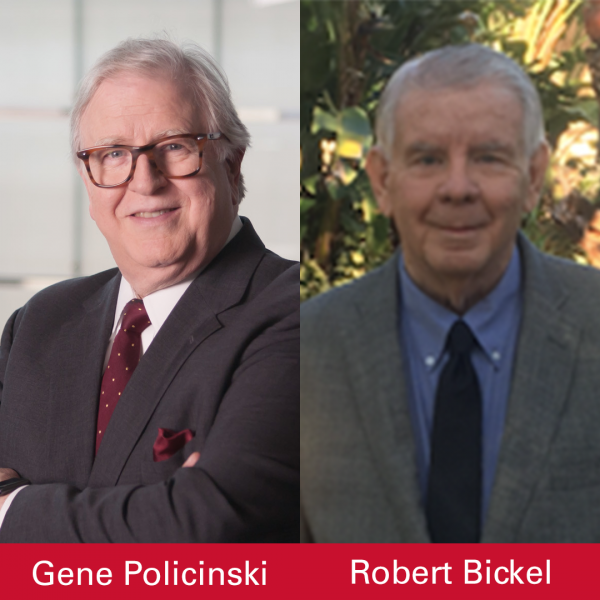 The First Amendment and the Civil Rights Movement:
Our History, Our Present, Our Future –
Gene Policinski and Robert Bickel

The era of the civil rights movement is as relevant today as when it was unfolding. Join Gene Policinski and Robert Bickel, two leading experts in the First Amendment and the Civil Rights movement as they discuss the immense potential and actual power of our First Amendment freedoms to fuel positive change in society. 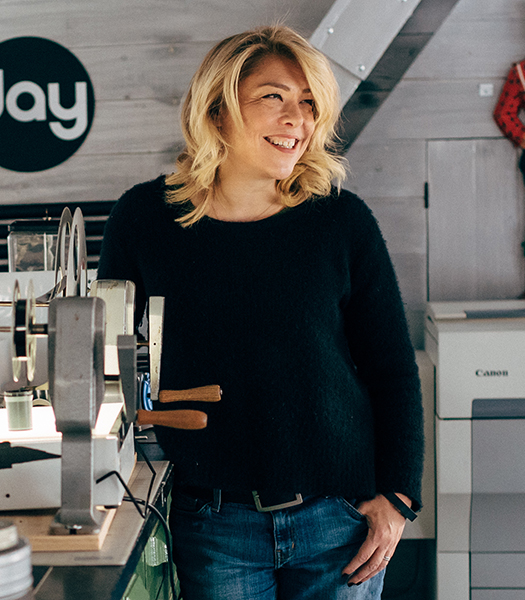 Signs of Resistance: A Visual History of Protest in America –
Bonnie Siegler

Bonnie Siegler, founder of the multi-disciplinary award-winning design studio Eight and a Half, showcases a collection of visual expressions of resistance throughout American history. In hundreds of iconic, smart, angry, clever, unforgettable images, Signs of Resistance chronicles what truly makes America great: citizens unafraid of speaking truth to power. Many of these images throughout our history are as relevant today as they were then. And like history itself, some offer hope, some will make us laugh and some will take our breath away.

Put what you learn into action the following day with our hands-on Signs of the Times Protest Art Workshop at 10 a.m. Wednesday, April 13. 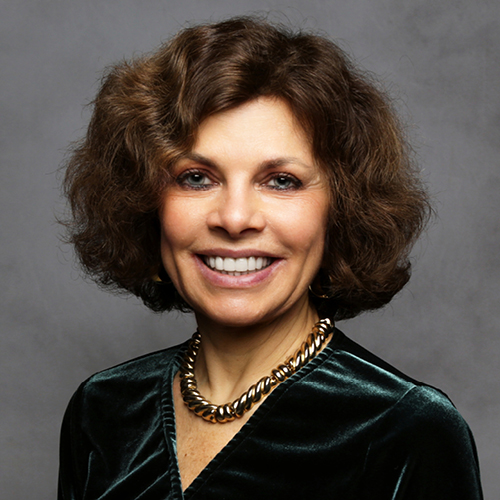 Hate: Why We Should Resist It With Free Speech, Not Censorship – Nadine Strossen

Nadine Strossen, a professor of constitutional law at New York Law School and the first woman national president of the American Civil Liberties Union (1991-2008) is a leading First Amendment and human rights advocate who argues that free speech, not censorship, is the best way to resist hate and promote other fundamental concerns, including equality, dignity, diversity, inclusivity, democracy and social harmony.

Virtual sessions exploring various First Amendment topics will take place throughout the day Thursday, April 15. These sessions offer an opportunity to dive deeper into topics and situations related to the First Amendment and to discuss and ask questions.

Think Like a Journalist: Arrested on the Job – Andrea Sahouri

Des Moines Register reporter Andrea Sahouri was covering a Black Lives Matter protest last year when she was pepper sprayed in the face and arrested by a Des Moines police officer. Sahouri and others made it clear she was a journalist, but prosecutors refused to drop the charges. After a three-day jury trial, it took jurors less than two hours to acquit Sahouri of all charges. During this Depth & Dialogue session, Sahouri will share her harrowing story, talk about the importance of a free press and answer questions.

The culmination of our weeklong First Amendment Days celebration is a one-, two-, or three-hour workshop designed to examine more deeply the challenges and opportunities provided by free expression. Led by First Amendment experts from the state, each 50-minutes session uses current events to engage a dialogue with national scholars. Free and open to the public, sign up for one, two or all three sessions.

Student activists have played an essential role in the call to action to improve campus climate. During this panel co-sponsored by Greenlee’s Diversity and Inclusion Committee and First Amendment Committee, student activists, including leaders from Students Against Racism and the Iowa State Daily, will share their experiences in mobilizing others on campus to create change. They will also discuss the challenge of dealing with hateful speech and share ways more students can get involved.

Art of Resistance at Iowa State: A Virtual Exploration

The First Amendment’s right to assemble and to petition is not the only path toward change. Art can be a highly effective form of resistance. In this First Amendment Day’s Depth and Dialogue, join the experts from University Museums on a virtual exploration of works of art on campus that seek to challenge the status quo. Questions from the audience will be encouraged.

Student-run public radio station 88.5 KURE is airing 3 hours of protest-theme content. Tune in at 88.5 FM, with the MyState app or on KURE’s website at kure.stuorg.iastate.edu to listen to our DJs share the best of protest music and the history of protests in the United States.

Discuss the power of social movements through youth free speech in America with Maribeth Romslo, the director and producer of “Raise Your Voice,” and First Amendment advocate Mary Beth Tinker. A free screening of “Raise Your Voice,” a film that spotlights student journalists from Marjory Stoneman Douglas High School following the mass shooting at their school, is available April 7 through April 21. If you’d like to request a screening link to view the film, please contact Julie Roosa, jroosa@iastate.edu.  The link will also be shared with all who register for the Raise Your Voice: First Amendment Days High School session at 1 p.m. Friday, April 16.

In celebration of First Amendment Days (April 12-16, 2021), the First Amendment Committee is hosting a First Amendment Pet Film Competition. View the 10 finalists’ submissions, and vote for your favorite by April 9. Students were challenged to demonstrate one of the five freedoms protected by the First Amendment – speech, press, petition, assembly and religion — in a video that’s 60 seconds or less. The winners will be announced at the Pawsises awards presentation at 6 p.m. April 15.

FAD Through the Years