During an era of declining enrollments in some colleges and schools of communication, the number of majors in advertising, journalism and public relations at Iowa State’s Greenlee School has risen by more than 6% in the past three months and more than 50% in the past five years.

The enrollment figures were needed a month before official counts are finalized at ISU because the Greenlee School required the data for the School’s re-accreditation self-study. The School ranks among the longest continuously accredited programs in the country along with several other programs with that national distinction since 1948.

In June 2015, the School learned that its enrollment showed an 11.5% increase over the previous year with 866 majors and double majors and more than 900 majors when graduate students were added to the tally. Data at the time showed 258 students in advertising, 355 in journalism and 253 in public relations.

Current data were calculated by using Spring enrollment minus spring and summer graduates and by adding 2015 incoming students. Majors are as follows: 247 in advertising, including 12 secondary majors; 372 in journalism, with 24 secondary majors; and 303 in public relations, with 28 secondary majors.

The big news here concerns the estimated 5% rise in journalism majors and near 20% rise in public relations majors. Overall advertising enrollment, which remains relatively steady, also shows a 25% growth in the number of incoming students.

Counting master’s students, the Greenlee School’s overall enrollment approaches 1000, making it the largest program in the College of Liberal Arts and Sciences. In 2011, the school had 650 majors, double majors and master’s students.

The chart below shows the upward enrollment trend: 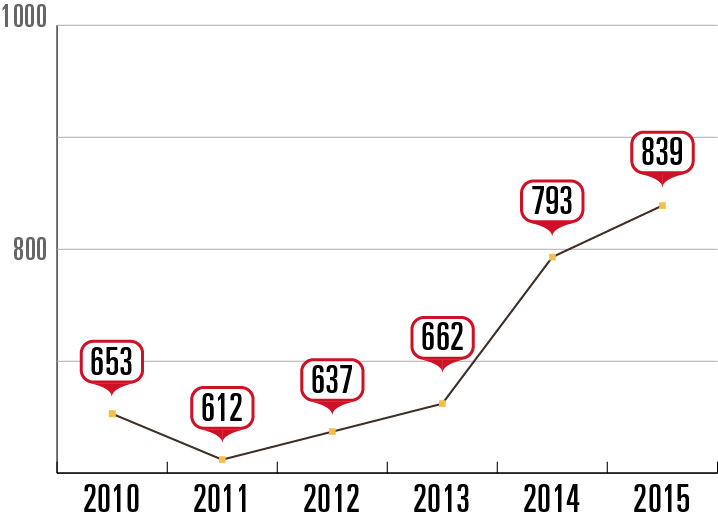 Competing schools and departments in the Midwest are reporting steady or declining growth in journalism and mass communication. However one national peer program, the Reed College of Media, under the leadership of Dean Maryanne Reed, recently increased its incoming enrollment by a more than 67% with 120 incoming students. (Estimate of incoming Greenlee School majors approaches 150.)

Since 2011, Reed College enrollment has increased by more than 30 percent, compared with Greenlee’s 50 percent. Reed College has an enrollment of 950 majors, offering degrees in journalism and strategic communication (which combines advertising and public relations). Both the Greenlee School and Reed College offer master’s degrees.

“It’s not surprising that West Virginia and Iowa State are showing upward trajectories,” said Michael Bugeja, Greenlee School director. Both programs have long traditions of working with industry with a focus on digital communication, quality undergraduate and focused graduate study.

Bugeja has been following West Virginia’s rise for some time, complimenting the College (then a School of Journalism) in a 2011 Chronicle of Higher Education article on digital innovation. Bugeja is cited as stating that journalism schools should look to West Virginia as a source of inspiration to revitalize not only their own programs but also the journalism industry as a whole.

Dean Reed is in the process of developing a Media Innovation Center, scheduled for completion in 2016, to create a culture of experimentation in journalism education. The Greenlee School is developing a Jump-Start Career and Internship program coupled with biannual Futures Forums with the same goal, Bugeja said.

Several factors are driving the enrollment increase in the Greenlee School, he added: