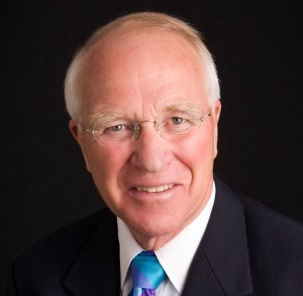 AMES, Iowa — Eldean “Dean” Borg, senior correspondent and producer for Iowa Public Radio, has been selected by the faculty of Iowa State University’s Greenlee School as the 2016 recipient of the James W. Schwartz Award honoring distinguished service to journalism and mass communication.

The Forest City native is a 1959 ISU graduate in technical journalism. He also holds a master’s degree in political science from the University of Iowa.

His degrees have helped distinguish Borg as one of the state’s foremost voices on public policy and politics. In addition to his IPR reports, Borg hosts and moderates Iowa Public Television’s popular “Iowa Press” broadcast, now in its 45th year.

“I’m fortunate to have learned from–to have been prepared by—Jim Schwartz,” Borg said upon learning he had won the honor in his former professor’s name. “Not only the photography and journalism law classes where he shared his expertise, but four years of observing his professional standards and personal character that served as a model for my classmates and me.

“I profited because Jim was good. Good at his profession and superb at mentoring students.”

Michael Bugeja, Greenlee School director, said he was delighted to hear that Borg had won the Schwartz Award. “By coincidence or serendipity, Dean and I shared the same mentor,” former Iowa State agricultural journalism and broadcast professor Harry Heath.

Heath, who left ISU to become director of the Oklahoma State journalism school, hired Bugeja from United Press International and played a key role in helping him transition from reporter to professor.

“Harry would be exceptionally proud to know that Dean Borg has won the award," Bugeja said.

Borg credited Heath with teaching him broadcast journalism. “It wasn’t in a formal classroom, but in a radio studio that Professor Heath crafted in the journalism department basement. He developed an arrangement with KASI, a downtown Ames commercial station for a daily, five-minute broadcast from our remote studio.

“Harry, with shirt collar unbuttoned and necktie loosened, would look over my copy. With an editor’s pencil, he’d mark it up and send me into the studio while he operated the engineering switches for our daily newscast. We were quite a team," Borg said.

“Harry Heath was a journalistic Godfather to me," Borg added. "He not only guided me academically, but also pointed me to professional opportunities that shaped my career. But most of all, he prepared me to succeed in those opportunities.”

Borg’s reputation for quality journalism and ethical character made him a prime candidate for the Schwartz Award, Bugeja said, and faculty and administrators across campus were excited to learn he’d been selected.

Dean Borg will attend the Greenlee School Advisory Council’s October meeting where he will be honored officially with presentation of the Schwartz Award. Time and place will be announced closer to the event.