For the past several years, incoming advertising, journalism and public relations majors in orientation class have learned about two Iowa State University icons who define the culture of the Greenlee School of Journalism and Communication—Jack Trice, after whom the Division I football stadium is named, and George Washington Carver, the institution’s first African-American graduate and faculty member.

Director Michael Bugeja, who revamped the orientation class in 2012, introduces new students to the history of Trice, the only ISU athlete to die during competition, and Carver, one of the world’s top agricultural scientists; Bugeja also shares mottos from these men that promise Greenlee majors success if embraced throughout their college careers. 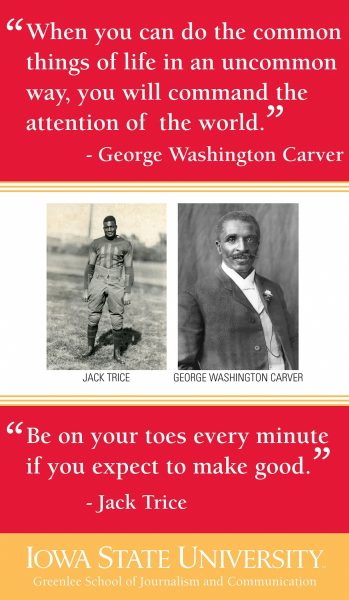 While teaching at ISU, Carver once told his students, “When you can do the common things of life in an uncommon way, you will command the attention of the world.” That remains one of Carver’s most shared of his many famous quotes.

On the eve of his first away game against Minnesota in 1923, Trice wrote a letter in the Curtis Hotel in Minneapolis, titled “To Whom It May Concern,” discussing how he would honor his race as an athlete and ending his script with the memorable words: “Be on your toes every minute if you expect to make good.”

These mottos apply to many professions, Bugeja noted. However, at the Greenlee School, ranked as one of the best mass communication programs in the country, “students apply those mottos every day in their classwork, in their clubs and student media, and in their internships.”

Bugeja is not the only Iowa State employee embracing those mottos; Coach Paul Rhoads believes they also apply to the football team. Just as Greenlee majors must find “uncommon ways” to succeed, “our football team strives to achieve things that have not been done before at Iowa State. And while the quote from Jack Trice, who is truly woven into the fabric of our football program and university, originates from his advice about football, it certainly is true about the Greenlee School as well.

“No one ever knows when a great opportunity will arise,” Rhoads added, “whether it is an open receiver to whom the quarterback can throw a touchdown, or an assignment that can gain a student notoriety. In order to take advantage of these opportunities, one must always be prepared.”

Several Iowa State athletes are enrolled in the Greenlee School because of the culture of preparedness. Rhoads credits the school’s academic and faculty advisers who “do a fantastic job of preparing our student-athletes for life after graduation.”

Bugeja also praises the dedicated faculty and staff at Greenlee for living the banner’s mottos as role models for students. In the past four years, Greenlee enrollment has grown 51% to 922 majors. Since 2003, Greenlee faculty and staff have won 19 college, university and national awards for teaching and research. In 2014, the School won the national Equity and Diversity Award from the Association for Education in Journalism and Mass Communication.

Greenlee also ranks as the longest continuously accredited program in the country, along with several other programs receiving the distinction in 1948 from the Accrediting Council on Education in Journalism and Mass Communications.

The first agricultural journalism class at then-named Iowa State College was scheduled in 1905 when Carver, who had left Ames to head the Tuskegee Experiment Station in Alabama, published his famous bulletin, “How to Build Up Worn Soils.” Carver’s workwas instrumental in inspiring Trice to enroll at Iowa State in animal husbandry. Had he lived, Trice planned to relocate to the South and share modern agricultural techniques to help African-American farmers.

The new Trice-Carver banner hangs on the wall in the Greenlee student lounge area near the orientation classroom and outside the entrance of the award-winning Iowa State Daily.