With ever-growing ways to communicate and share ideas in this digital age, women’s rights have been brought to the forefront of the media like never before, Kathleen Parker explained to a full Benton Auditorium last Thursday. The Pulitzer Prize-winning columnist for The Washington Post, spoke about empowering women through communication, in her lecture titled, “The Global Tide of Women Rising.”

Students and faculty from the Greenlee School and other departments, and community members filled the auditorium, with students sitting on the stairs and in the doorways, to listen to Parker share her experiences.

Parker began her lecture for the evening by praising the incredible advances in communication that have happened over the years. “The world has opened up in ways that have never been available to the human race,” said Parker. Parker said these communications advances greatly benefit women in all countries, especially in underdeveloped countries, because of the media exposure human and women’s rights violations receive. Before, these issues would have been hidden from the public. 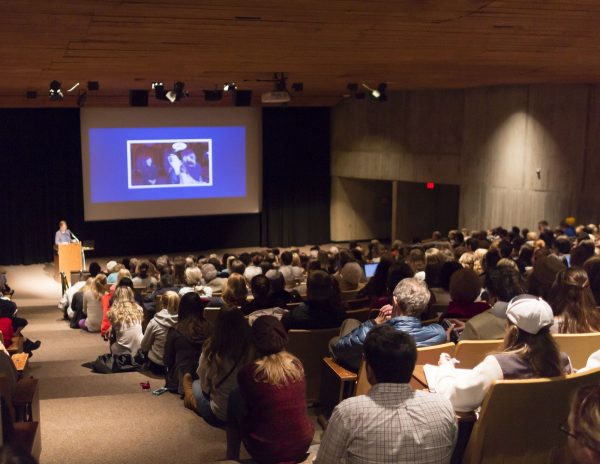 Parker also spoke about her personal experiences with feminism and women’s rights. A self-proclaimed “born-again feminist,” Parker explained to the audience how she was originally extremely liberal, but after the birth of her first child, she developed more conservative views, both politically and personally. This all changed after a life-altering trip to the Middle East.

Parker and fellow journalist Robin Roberts accompanied former First Lady Laura Bush on a humanitarian mission to promote early breast cancer detection programs in the Middle East. They encountered a situation where there was a strong stigma tied to discussing women’s health issues. The meeting with the First Lady was the first opportunity many of these women had to speak about their health openly. Parker said she realized in that moment, if women are given permission to talk about their health, it might give them permission to talk about something else. After the trip, she became very involved in feminism and women’s rights.

While Parker is a firm believer that communication is a major tool to promote women’s rights, she also believes the answer lies within women helping each other. “Every time you have the opportunity to help another woman, you should do it,” she said.

Parker is a national-renowned journalist who currently writes an opinion column on politics and culture for The Washington Post. It is the most widely-syndicated column in the United States, reaching nearly 80 million people through over 500 newspapers. She is also a political analyst for MSNBC, and she is the author of the book "Save the Males: Why Men Matter and Why Women Should Care."

The lecture was hosted by the Mary Louise Smith Chair in Women and Politics, presented by the Carrie Chapman Catt Center for Women in Politics. Parker is the 28th woman to visit Iowa State University through the sponsorship of the Chair.