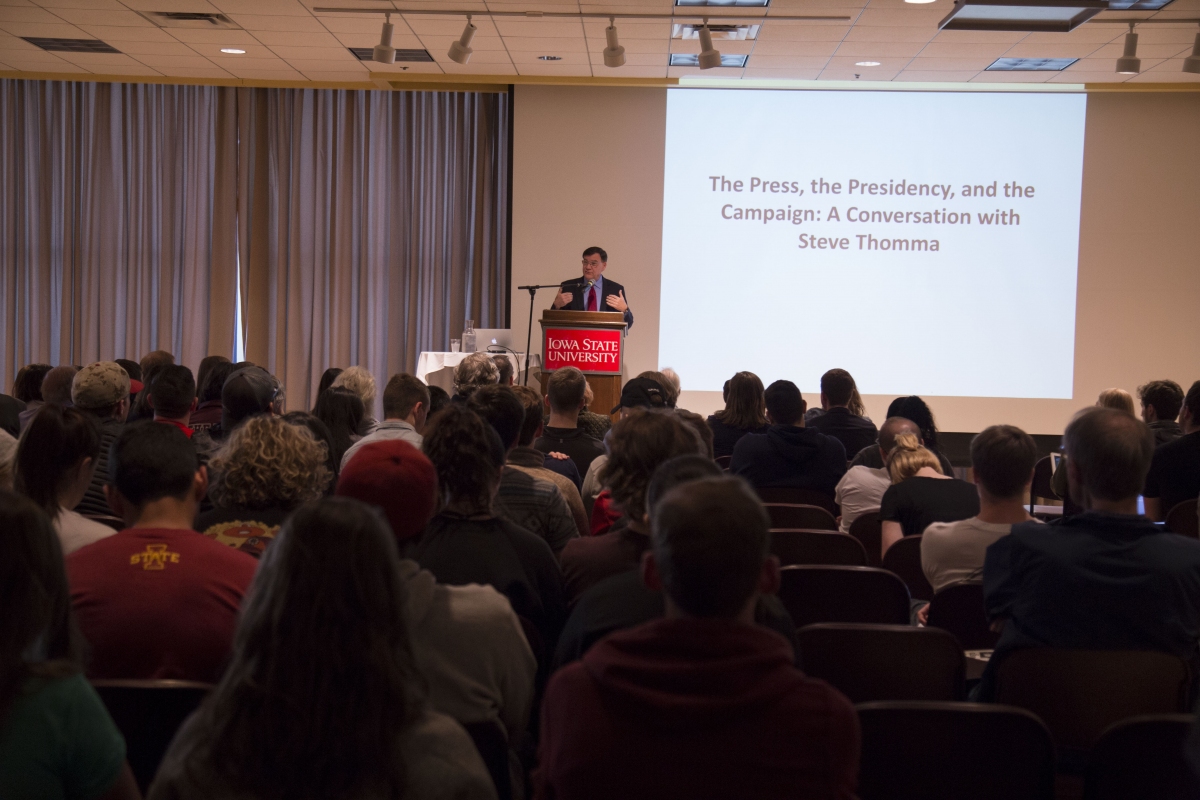 With politicians and the 2016 presidential election in the forefront of the news, the 2016 First Amendment Day keynote address focused on the issues related to U.S. citizens’ freedom of the press and how the president and presidential campaigns have at times undermined that freedom.

Steve Thomma, senior White House correspondent and political editor for McClatchy, spoke about why press freedom is so important, especially in the light of the upcoming presidential elections in his lecture, “The Press, the Presidency, and the Campaign.” 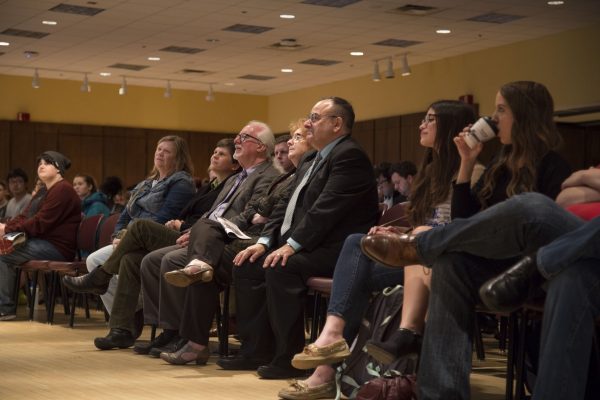 The event was held last Thursday in the Memorial Union Sun Room to a full audience of Iowa State and mostly Greenlee School students, faculty and staff.

Thomma began the lecture by talking about what his dream candidate would be, from a reporter’s perspective. He shocked many when he named Jeb Bush as a great candidate, but explained that this was because of his willingness to take questions from the press and his campaign’s efforts to make him readily available for interviews.

Next Thomma ranked the current presidential hopefuls from best to worst in terms of their perceived transparency as the nation’s potential next president and their threat level to free press in the country, based on their actions and rhetoric so far in the race. He went through the first three —Republican John Kasich, Democrat Bernie Sanders and Republican Ted Cruz — quickly, noting their campaign’s efforts and shortcomings in working with the media. Thomma ended his list with Hillary Clinton, Donald Trump and surprisingly, current President Barack Obama, describing their relationships with the press and transparency as candidates.

He spoke about Clinton’s unwillingness to release transcripts from the speeches she gave to Wall Street institutions like Goldman Sachs between her time as Secretary of State and a 2016 presidential candidate, as well as her ongoing email scandal and overall lack of willingness to speak to the press. However, he did note that she has recently started to take more questions from reporters, which he called a good sign.

Thomma then went on to Donald Trump, who he called a “creation of the media.” Trump’s media bashing and his position that libel laws should be loosened to make it easier to sue journalists are two of the reasons that Thomma justified Trump’s second-place ranking on his list. Trump’s tendency to sue publications and journalists is a threat to the media, he explained, because publications often can’t spend money to defend themselves from the large lawsuits that Trump has brought against media outlets, including the Chicago Tribune, which he sued for $500 million in 1984 after its architectural critic wrote that one of Trump’s planned hotels wouldn’t be taller than the Sears Tower.

A good portion of Thomma’s lecture focused on President Barack Obama and how his own lack of transparency goes against how he portrayed his administration in his 2008 campaign.

“[President Obama] has helped marginalize the voice of the media,” Thomma said, citing the fact that the Obama administration has conducted the most criminal investigations of journalists than any of the past administrations combined.

He went on to explain how Obama has done fewer press conferences and question-and-answer sessions than many of his predecessors and when he does, they tend to be with less serious media figures, like Jimmy Fallon, John Stewart, Stephen Colbert and Zach Galifiankis on his popular web series, Between Two Ferns. These appearances often lack hard-hitting questions that he might face from professional journalists.

The White House’s media presence has changed dramatically under President Obama. The communications staff has ballooned to 69 staff members, an all time high. The other major change is the administration’s use of social media. This allows the White House to release content without having to go through outside media.

“[The White House] only lets their people in to release their version of the truth,” said Thomma. 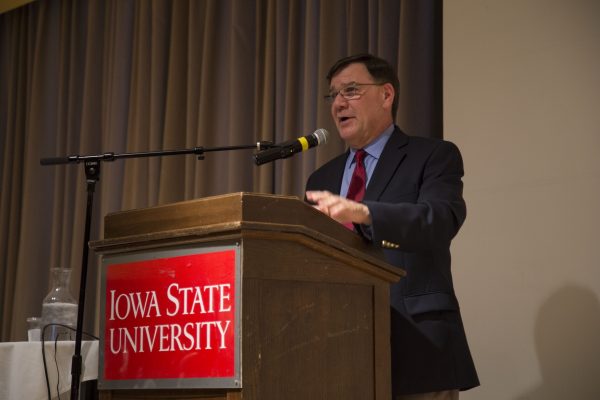 Thomma concluded his speech by encouraging the audience to fight for press freedom, along with the other four freedoms guaranteed by the First Amendment. “It’s a fight worth fighting because there’s stuff we need to know,” he said.

Thomma has been covering Washington politics since 1987 and is a former president of the White House Correspondents Association. Thomma won the Aldo Beckman Award for distinguished White House coverage for his campaign work in 2000.

The 2016 First Amendment Day keynote lecture was sponsored by the Greenlee School of Journalism and Communication, as well as the Iowa State Daily, the Leo Mores chapter of the Society of Professional Journalists, and the Student Government’s Committee on Lectures.

Read coverage of Thomma’s lecture from the Iowa State Daily.