The months leading up to the Iowa caucuses brings an endless parade of presidential candidates through the state and the national spotlight follows. Greenlee students have reported for class assignments and student media alongside members of the national press at candidates’ events across the state, but on Thursday one journalist, TIME’s Philip Elliott, stopped at Hamilton Hall to meet with students and faculty.

Elliott has worked as a Washington Correspondent for TIME for about 8 months, after almost a decade of working for The Associated Press. After interviewing Rand Paul and having dinner with Bobby Jindal in Iowa City earlier in the week, Elliott make a visit to the Iowa State campus before heading to Des Moines to follow Carly Fiorina through her latest Iowa circuit.

Studying journalism in the state that holds the first caucuses in the nation offers Greenlee students a unique opportunity, Elliott told the group of 43 students, faculty and staff. “[Iowans] shape the future of this country, so talk to the people who are making these decisions,” he said. 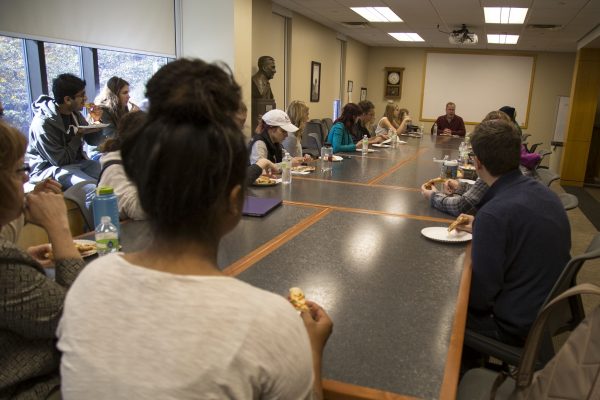 “A tweet from you has just as much potential to shape the race as a story in the New York Times does,” Elliott said, encouraging students to publish their observations when they’re talking to citizens, voters or candidates at campaign events.

Elliott advised students going into journalism or mass communication to always consider how best to tell their stories to their audience and to treat everyone they work with in any capacity with respect. When asked what students could do to help their chances of landing jobs at places like TIME, Elliott recommended that they demonstrate their curiosity about the world around them through the work they put in their portfolio. Sharing some of his latest stories, including: exploring SNL comedian Kate McKinnon’s characterization of Hillary Clinton; profiling Ben Carson and his presidential campaign; writing about the spouses of the 2016 GOP presidential candidates; and covering the Supreme Court’s marriage equality ruling earlier this year show how Elliott practices this philosophy in his job at TIME.