Mass media regularly attracts criticism for its coverage of this or lack of coverage of that. The Greenlee’s School’s fall Futures Forum focused on the realities and ethical dilemmas of today’s digitally-connected world and what implications that has and will continue to have on professional communicators and journalists.

The forum titled, “Media: Informants or Enablers?” was held Thursday night in the Pioneer Room of the Memorial Union. Greenlee students and faculty filled the room to listen to a panel of journalism and communications experts share their perspectives on dealing with ethical dilemmas in today’s fast-paced media environment.

Beell kicked off the discussion by bring up recent tragedies involving the media directly, such as the live-broadcasted murders of Virginia journalists Alison Parker and Andrew Ward in August. Beell questioned the panel about the appropriateness of sharing such images and similarly disturbing content with audiences.

Rood said that each instance must be dealt with on a case-by-case basis, but that ultimately, “you have to ask yourself, what is the point of showing this?” Powell agreed, adding that journalists have to decide whether showing the graphic content is really going to make a difference in the integrity of the story. She also discussed how she was personally effected by Parker and Ward’s deaths and how her newsroom approached their coverage without showing the footage of the actual incident.

Besides the appropriateness of using certain content, panelists discussed how ethics plays a role in all forms of communication. “Ethics is vital,” said Waetke, who entered the public relations field after working for five years as a journalist. He explained that he left journalism due to his frustrations about what he perceived to be a lack of ethics and a rise in sensationalism. 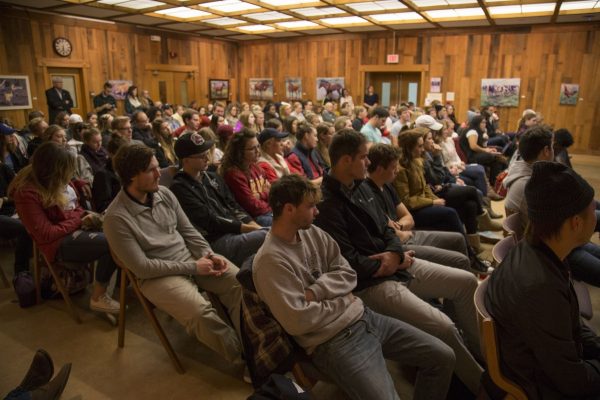 Greenlee School Director Michael Bugeja steered the conversation into politics, asking about politicians’ latest accusations that the mainstream media’s coverage of the 2016 presidential election has been more biased than objective. Throughout the various points of discussion related to politics, the panelists all agreed that no matter how news sources and journalists cover any issue, there will always be people who find flaws with it, especially in politics. News outlets will almost always be accused of bias, making it ever-more important for journalists to approach their reporting in a fair and balanced manner.

Today’s 24/7 news cycle has also changed how politics are carried out, especially the recent political debates. “Each one of those candidates is trying to come up with that 20-second sound bite,” said Waetke. This leads to a lot of coverage over the race itself, and the issues sometimes get drowned out in the background. Rood agreed, explaining that operating in the state which holds the nation’s first caucuses, the Register has a responsibility to cover both the issues and the horse race coverage and while she believes they do a good job at doing both, it can seem at times that the drama of elections overpowers the more substantial coverage.

The night closed with each panelist making their recommendations to students who want to join this growing and changing field. The panelists encouraged students to find their passion, whether that be journalism or a related field. “Journalism is tremendous training for other professions,” said Rood. News is going to continue to diversify and change in the future, giving students lots of new options to explore. She said that students who want to enter the industry are at an advantage, because they’ve grown up with a digital-first mentality that many older professionals have to work to adapt to.

“Looking ahead, there’s lots of opportunities, no matter where you go,” said Powell.