Richard Martinez, junior in journalism and mass communication and pre-law, and Rachel Geronimo, senior in journalism and mass communication, started working on a video project about the Iowa State Fashion Show almost a year ago, when they both worked at the Iowa State Daily. Their original idea was to produce a short video about the annual student-run ISU Fashion Show. 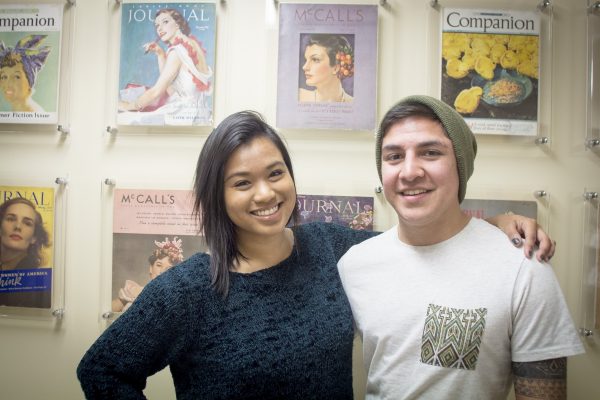 Once their cameras started rolling, they quickly understood that there was more to the story than they had anticipated. “We realized that there was a lot more going on than we initially imagined, and eventually we got the idea to make it a more long-form piece,” Martinez said, adding that they wanted to make sure to do justice to all of the work that students dedicate to the fashion show each year with their video.

The Iowa State University Annual Textiles and Clothing Fashion Show is in its 33rd year of highlighting student designs at Iowa State. It’s also one of the largest student-produced and promoted events in the nation, with over 100 members working on the various committees involved with planning and executing the annual event.

“These people definitely need the credit for it,” Geronimo said. “A lot of people don’t realize how much work is being put into it…it’s truly a student-based organization.”

When working on the documentary, Geronimo and Martinez immersed themselves in the fashion show process, attending meetings, fittings and classes. They say this made the filming fun, but also difficult at times.

“We had to follow them around day-by-day on their schedules,” Martinez said. “There were days when we didn’t have any free time or time to eat, because there are so many committees and parts of the show — there was something happening almost every day.”

Geronimo and Martinez weren’t the only ones who worked on the project; the two received help with filming and editing the documentary from Blake Lanser, senior in child, adult and family services, and Jenna Reeves, junior in journalism and mass communication. The group finished the video in January and held a screening in February.

Although it began as a project for the Daily, Geronimo said that it ended up turning into a personal project for her and Martinez. “It was just a fun individual project that we wanted to produce,” she said.

Now that the film is finished, the College of Human Sciences plans to use it to promote the program on their website, and it may even be entered into the Snake Alley Film Festival in Burlington, Iowa.

Throughout the filmmaking process, Martinez said he got a lot of experience with decision-making and thinking on his feet. He said he had to figure out how to navigate obstacles, like one designer not wanting to be interviewed and not being able to film certain meetings and preparation sessions.

While their drive and passion made the film a reality, Martinez says that without support from the Greenlee School the film may not have happened.

“If you have the idea for something, there are the resources out there for you to pursue it — especially within Greenlee,” Martinez said.

Geronimo agrees, urging students to take advantage of what Iowa State has to offer. She said that making the documentary gave her a new perspective on her field and skills that she can take to a future career.

“I hope this can really inspire not only the fashion department, but also Greenlee students,” she said. “Making the documentary really opened my eyes and made me realize that I can take this field and do anything that I want. You can really be a part of something by documenting it and sending out information to the public.”