Michael Bugeja, director, received a citation by the U.S. Treasury Department for his service on the Citizens Coinage Advisory Committee. The citation reads, in part: “In gratitude for your distinguished public service to the Secretary of the US Treasury … Your exceptional work has helped the United States Mint fulfill its mission, ensuring that each coin and medal connects every American to our nation’s greatness and future hope.” 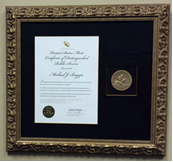 The plaque contains a bronze replica of the Congressional Gold Medal awarded to the Kiowa Nation for its Code Talkers in World War II who played a key battlefield role in the 689th Field Artillery Unit. In addition to this medal, Bugeja and others on the CCAC advised the Secretary of the Treasury on designs for several other Congressional medals, including the 16th Street Baptist Church Congressional Gold Medal awarded to commemorate the lives of domestic terror bombing victims Addie Mae Collins, 14; Denise McNair, 11; Carole Robertson, 14; and Cynthia Wesley, 14.