Senior Lecturer and Meredith Professional-in-Residence Deb Gibson’s career came full-circle last Friday night, as she received a 2016 Faculty and Staff Inspiration Award from the Iowa State Alumni Association, where she began her career in 1982 as an information specialist. For Gibson, the award and the nominations that led to it mirrored her own experience as an ISU journalism major in the late seventies.

During her acceptance speech, Gibson recalled intially feeling overwhelmed by her first reporting and writing class and its bootcamp-style coursework. What helped her persevere and continue into a lifelong career in the industry and eventually back in the classroom, she told the audience, was encouragement from her first instructor, Dr. Dale Boyd. 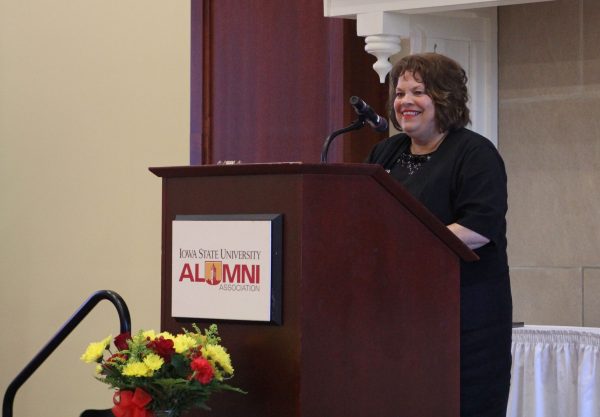 Gibson vividly remembers receiving her final grade from Boyd’s class, which, along with her A grade, included a note from Boyd: "Your work shows bursts of brilliance and professionalism, but to succeed to must overcome what appears to be great shyness."

"To this day, I regret not telling Dale Boyd thank you for giving me that push that I needed, for telling me ‘yes, I could do it,’" Gibson said. "It’s with a full heart, that I thank my former students for telling me what I should have said to him."

Since joining the Greenlee School faculty in 2000, Deb has taught and advised hundreds of Greenlee majors. In 2004, she began leading the Meredith Apprentice Program at Iowa State, earning her the title of Meredith professional-in-residence. In this role, she selects and works with Iowa State’s Meredith apprentices, who spend a full academic year working for Meredith publications. Some of her former students have gone on to work for national publications including Men’s Health, Billboard magazine and Meredith publications including Better Homes and Gardens and EatingWell Magazine.

Some excerpts from Deb’s nominations include:

"I’m still finding out just how much she’s inspired me. But when I try to sum it up in a sentence, it’s this: I get to go to a job I love tomorrow because of Deb Gibson." – John Lonsdale, ’13

"Besides being a wonderful, effective teacher, Deb truly gets to know and care for each and every student she advises. Whether that means connecting them with her successful alumni for job shadows, counseling them through a family crisis or simply assisting them with class selection, she’s always there." – Karla Walsh, ’10

"Without Deb, I would have never worked in journalism. She even talked me out of law school by telling me to trust my creative energy. Her enthusiasm for media advising sparked my career." – Chelsea Julian Reynolds, ’08

"Deb taught me how to find my written voice, create an effective story and guided me to find my passion because she brought out the fun in journalism. People say it’s never work if you enjoy it. Deb always made work and school enjoyable." – Devon O’Brien, ’13