Iowa State’s Greenlee School of Journalism and Communication had its second-highest recruiting year in 2016 with 147 incoming students in Advertising, Journalism and Public Relations, bringing total enrollment to 844.

As the semester progresses, the School typically picks up dozens of additional majors from other ISU programs and transfers from other institutions. “Recruitment is ongoing in the School,” Director Michael Bugeja said, anticipating gains later in the year primarily through excellent teaching in introductory and non-major principles classes. “We place some of our best teachers in those classes as part of our recruitment plan,” he added, noting five instructors in recent years won college awards for introductory teaching.

Bugeja also noted a chief attraction concerns degree programs. “Our students are assured that their chosen field — ‘Advertising,’ ‘Journalism and Mass Communication,’ and ‘Public Relations’ — not only will appear on their transcripts as ‘majors’ but also on their degrees and diplomas.”

Earlier this year the Greenlee School was re-accredited by the Accrediting Council on Education in Journalism and Mass Communication, which found the program in compliance on all nine standards. The School has enjoyed continuous accreditation since 1948. “Accreditation gives us national status and helps us maintain all-around excellence,” Bugeja said. “That plays a key role in recruitment.”

The chart below shows Greenlee School freshmen recruitment since 2011: 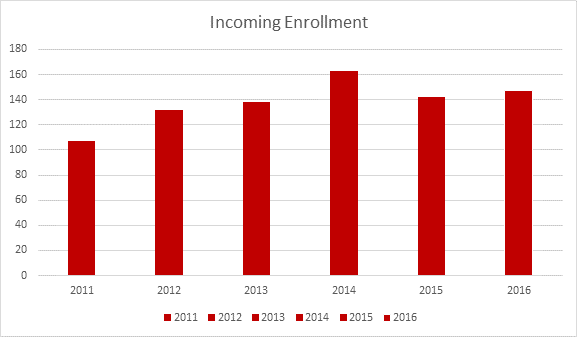 While many journalism and mass communication schools are experiencing declining enrollments, the Greenlee School continues to gain.

The chart below tracks growth over the last six years: 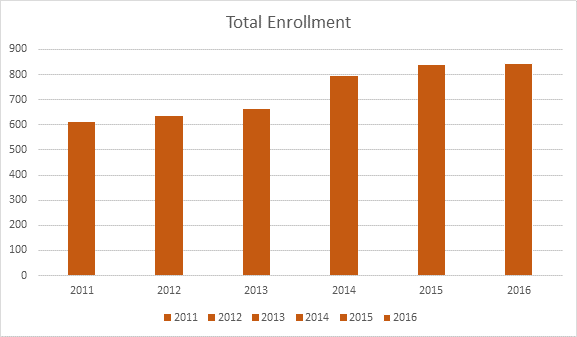 Also recognized is the role of Greenlee ambassadors, the school’s top students who act as hosts during prospective student visits, interacting with high schoolers and their parents to make them feel part of the program before they decide on a university.

The school also credits alumni and donors for providing scholarships for current and incoming students to offset debt. The school awarded $210,000 in scholarships last year with a substantial portion of that going to new students to jump-start their academic careers as soon as they arrive on campus.

Another key feature in high Greenlee enrollment is placement rates and timely graduation. The school has a 98% placement rate in Advertising, 96% in Journalism and 100% in Public Relations within six months of commencement, with the majority remaining in Iowa.

The school’s curricula features lower and upper core courses with most other courses serving as electives with as few pre-requisites as possible, to facilitate timely graduation. Latest exit surveys show that seniors needed an average 7.75 semesters to graduate, or less than 4 years.

You can find more statistics about the Greenlee School on its transparency website.