Tuttle completed her required capstone 499A internship through the NASA internship program while at the Johnson Space Center in Houston. She continued to work at a co-op program at Kennedy Space Center where she eventually transitioned to a full-time position after graduating.

“Greenlee allowed me to find my niche within the world of PR. I fell in love with science communication while at Iowa State and never looked back. Greenlee gave me the foundational skills to make sure I went into my internship and job with the writing, planning and communication skills needed to be successful,” Tuttle said.

While preparing for the NASA launch, Tuttle co-produced a series called “Path to Pad” which detailed the nearly two-year project. The series features the creation, assembly and launch of the rocket.

Tuttle feels privileged to have worked on the Artemis I project and continuously looks forward to coming into work to share the story of NASA’s return to the Moon. She enjoys the aerospace industry and the dynamic work schedule that comes along with it.

The launch was originally planned for Aug. 29 but was postponed after engine issues and unfavorable weather. Artemis I launched Nov. 16 and will be in space for 42 days—the longest time a spacecraft has been in space without docking at a space station.

Anticipating different outcomes is an important aspect of creating a well-rounded communications plan.

“We are pretty used to having to reset our operations due to scrubs and delays,” Tuttle said. “Weather or technical issues pop up quite a bit during rocket launches, so we have meetings months in advance of the launch to prepare and build that into our communication plans.”

With the successful launch of Artemis I, Tuttle is now preparing for the Artemis II mission which will carry astronauts around the Moon. Eventually NASA hopes to land the first woman and first person of color on the Moon. 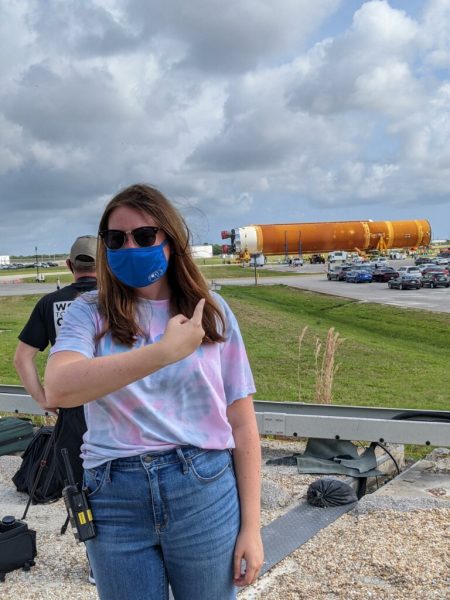