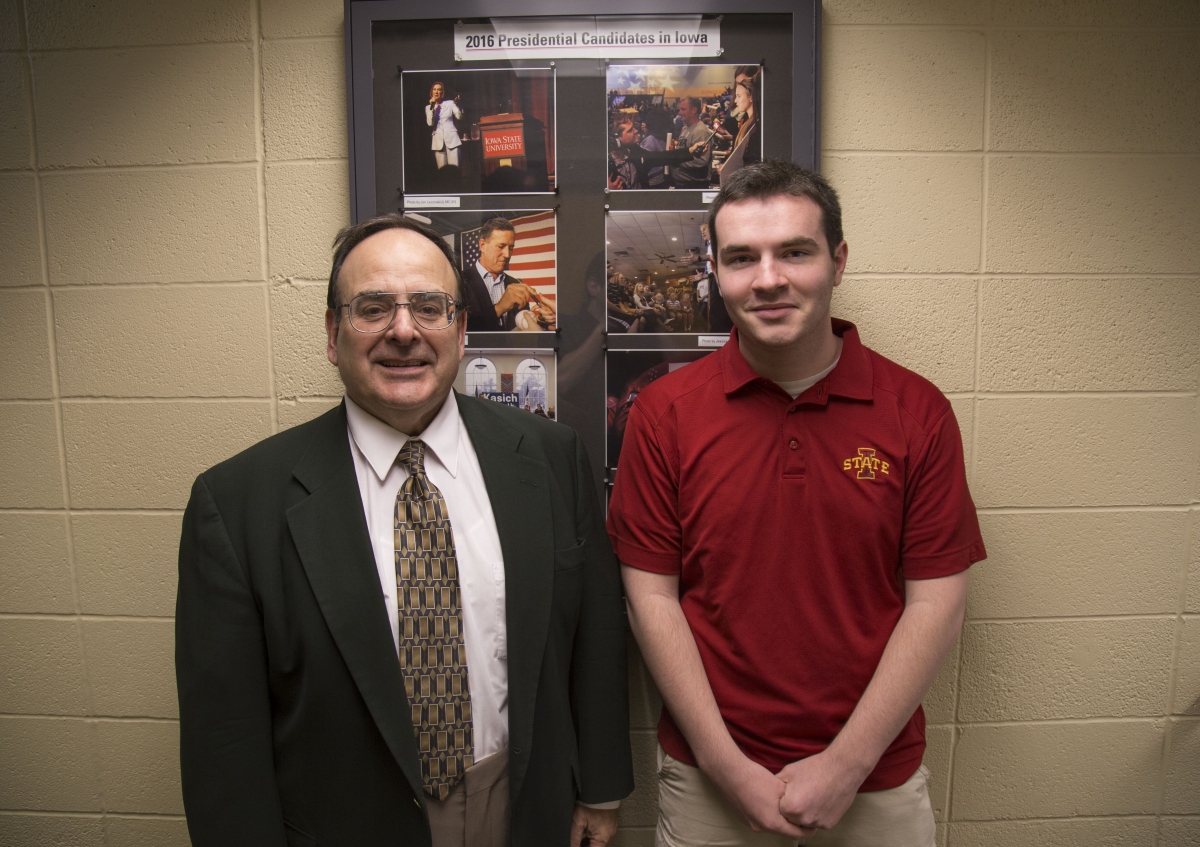 Throughout the 2015-16 school year, Alexander Hanson, sophomore in journalism and mass communication and political science, has led the Iowa State Daily’s political coverage as one of the student newspaper’s news editors.

Hanson’s role has put him in contact with a number of presidential candidates, as they began their bids for their parties’ nominations in Iowa as early as the summer of 2015. Hanson led his team of 12 ISD reporters in covering the 2016 election, as presidential hopefuls toured the state leading up its first-in-the-nation caucuses. He himself interviewed candidates including Democrat Martin O’Malley and Republicans Carly Fiorina, Bobby Jindal and Rand Paul, asking about their plans for the nation and stances on issues relevant to the Iowa State community.

With his close proximity to politicians who were campaigning be the next president of the United States, it’s fitting that Hanson was selected as the 2016 winner of the Hugh S. Sidey Scholarship in Print Journalism. Sidey was an ISU journalism graduate who spent his career as a long-time reporter for Time magazine. Sidey wrote about every U.S. president from Dwight D. Eisenhower to George W. Bush, forging working friendships with Presidents Reagan and George H. W. Bush that he maintained even after they left the White House.

Hanson’s winning essay titled, “The Most Important Job in This Democracy,” was chosen by a committee of judges, including Sidey’s relative Ken Sidey. Sidey remarked that the essay considered Hugh’s belief that the presidency remains the most sought-after, analyzed and scrutinized office on earth, while showing “awareness of the changing nature of news coverage.”

A Bettendorf, Iowa, native, Hanson came to Iowa State specifically to study journalism, though he had no prior experience in journalism. He got his start reporting for the Iowa State Daily as a freshman, only to return in his sophomore year as a news editor.

Hanson’s dream job is reporting on politics for a national news organization, like the ones that he will tour as the 2016 Sidey scholar on his trip to Washington, D.C., this fall. Last year’s winner toured media outlets including The Washington Post, the Associated Press, CNN and The New York Times.

The Hugh S. Sidey Scholarship in Print Journalism is an annual award that was established in 2006 at Iowa State University, Mr. Sidey’s alma mater, by the White House Historical Association and Mr. David M. Rubenstein. The scholarship is intended to keep alive Sidey’s legacy of reporting on the presidency by supporting aspiring print journalists at the Greenlee School.