Members of the ISU Association of Women in Communications chapter visited WHO TV Channel 13 in Des Moines last Thursday for a tour of the studio, a behind-the-scenes look at a live broadcast of their 6 p.m. newscast and a discussion with anchorwoman Erin Kiernan.

Greenlee Lecturer Lisa Munger Oakes, the club’s faculty adviser, said that she has been planning this trip since the chapter was started last fall.

Kiernan spoke to the group about professionalism, confidence and planning. 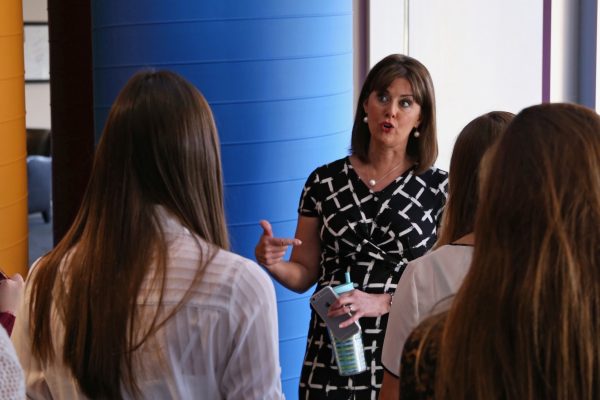 In a world that revolves around social media, Kiernan said that it is easy for reporters to find and use information without citing their sources. Having integrity and being honest is one of the most important aspects of being a professional journalist.

“People think that we just come in, sit down and read the news,” Kiernan said. “But it is so much more than that.”

After graduating from Drake University’s journalism program, Kiernan said that she thought her internship with WHO would turn into a full-time job, but was shocked when her time at the station was through and she had to find another position.

By learning from the mistakes she made as a young journalist, Kiernan said that she was able to grow in her career and she returned to the station in 2005 and started anchoring the 5, 6, and 10 o’clock newcasts one year later. Kiernan told the 20 ISU women that their dream jobs were highly achievable if they put forth the effort.

“I think that the ladies left feeling empowered and excited,” Munger Oakes said.

As part of WHO TV’s public image, anchors, including Kiernan, are expected to maintain an active social media presence and to engage with viewers. Earlier this month, Kiernan posted an image of herself holding her newborn son and not wearing any makeup to her Facebook page, where she received a barrage of comments about her appearance.

"Seeing Erin Kiernan in person was not only eye opening, but also exciting,” said Natalie Liedman, senior in public relations and vice president of the ISU AWC. “As a Des Moines native, I grew up watching Channel 13 my whole life. I got the chance to ask Ms. Kiernan about her recent social media post that sparked national news and was honestly amazed how she handled the issue. Over her life, she had many accomplishments and challenges, however, she’s continued to work hard and is now a strong female leader in broadcasting.” 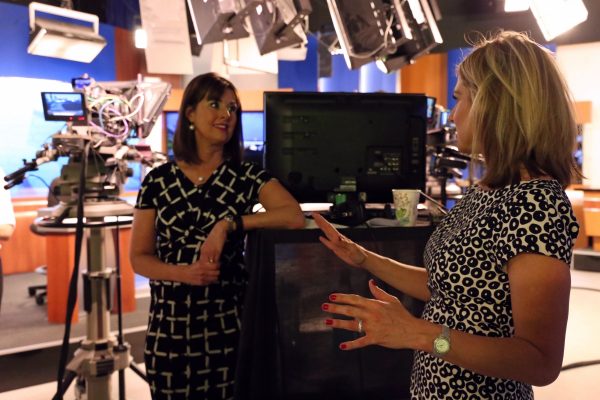 Kiernan’s candid angle on her personal and professional life is what makes her a great role model for young women, Munger Oakes said.

The AWC’s trip was the group’s final meeting for the semester, but the group is already planning events for next year. If you’re interested in getting involved with the ISU AWC, contact Lisa Munger Oakes.