Journalists have the obligation to afflict the comfortable and comfort the afflicted. They give voice to the voiceless and provide a microphone to their macro-thoughts.

Courtney Crowder of the Des Moines Register and Jaden Urbi, senior in journalism and mass communication, have proven their commitment to these ideas through their work highlighting underrepresented groups.

The Greenlee School of Journalism and Communication has recognized and awarded the two journalists with the first Kappa Tau Alpha Diversity and Inclusion Awards for their excellence in journalism. The award, established in 2017, is given to one professional journalist and one Greenlee student who have promoted a just and inclusive society through ethical storytelling and brought light to diverse lives and communities in order to broaden people’s understanding.

“Representation is incredibly important to help combat ignorance, draw awareness and inspire change,” said Urbi. “I think a lot of times it’s unintentional, but by neglecting to cover underrepresented groups or covering them inaccurately, it sends a message to society that those groups aren’t as important as the other stories that typically dominate the headlines.”

Urbi has spent three years dedicated to writing features about social issues and diverse communities through her class work and student media, including the Iowa State Daily and Ethos magazine.

“I think one of the most memorable stories is the one on homeless youth in Iowa for Ethos,” Urbi said. “That was probably the first story where, after the interviews, I had to take a moment and really process that there’s a lot more going on in our community than what people are aware of.”

With the understanding that some groups lack representation in the media, Urbi desired to tell the stories of people who don’t have the opportunity to tell their own.

“I started by noticing the stereotypical representation of essentially every character who wasn’t white on TV and, from there, I began to really observe the daily news headlines and see what they were choosing, or neglecting, to report on,” Urbi said. “So many stories fail to see the angle of a story from a minority group’s perspective.”

Urbi hopes to continue her journey as a feature reporter focused on diversity topics but believes any career path she takes will allow her to stress the importance of providing several points of view and giving everyone a chance to speak.

“I would love to work in a role where I’m able to focus directly on marginalized and underrepresented communities, but I think there’s potential in any media position to bring different perspectives to the forefront,” Urbi said. “Whatever role I end up in, I plan to look at every story and think, ‘How might this be affecting the people we’re not thinking of?’ or pitch new angles that allow the audience to connect with a group they wouldn’t necessarily identify with.”

Crowder, who is being awarded for her series on transgender Iowans for the Des Moines Register, has worked to share the stories of underrepresented groups for 10 years.

“Just like an investigative reporter, I seek to give a voice to people living on the edges or in subcultures that aren’t paid attention to,” Crowder said. “I think I’ve tried to do that my whole career, even in college. I seek to tell those stories in truth and to show the sides of the deeply personal, stressful and sometimes happy stories. I want to create conversations about what transgender means in terms of medical and legal policies.”

The idea for the series was born in summer 2015, around the time celebrity Caitlyn Jenner, who ran track in Iowa, came out as a transgender woman and received lots of media coverage. Crowder wanted to bring light to the discussion because of the Iowa connection; however, she decided to steer the story in a different direction by sharing stories of people who live and work in the community.

“It’s a public service to introduce this topic to our audience,” Crowder said. “We had a chance to discuss a community that had not been discussed before. I pitched it, and my newsroom leaders were welcoming and ready to resist the fast-paced internet culture.”

Crowder spent six months working on the series, along with Michael Zamora, Register photographer. She spoke with over 20 people, investing time in learning their stories and understanding their perspectives over the course of multiple interviews. Earning trust was key, and Crowder noted that was not something that could be achieved in one 15-minute interview.

“Going through this process was difficult, especially when getting people with hard backstories to open up,” Crowder said. “People will be hesitant to have their names in the newspaper and to talk about how it would affect their lives once it’s published. But having them tell their stories was powerful and brave. Their trust was too valuable for words.” 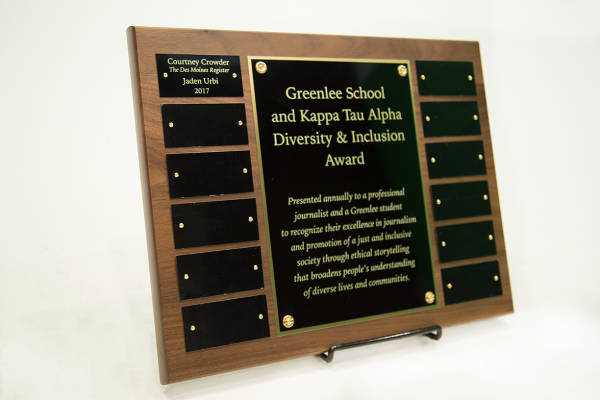 The in-depth nature of the series, which included several stories, a guide on transgender terms, a “By the Numbers” breakdown, photos and an interactive video presentation, encouraged readers to use technology to spend time with the content and consider the topic from many angles.

“With the invention of social media and the rise of globalization, we like to think that we are more connected than ever, but we have actually put a wedge between ourselves and others,” Crowder said. “It is part of my job to show the humanity that exists, no matter our circumstances, no matter our race or background. In a place like Iowa, no one thinks transgender people live here or segregation won’t happen, but it does. Through telling stories, we become closer as a community, and if I get to play a small role in bringing Iowa together, that would be unforgettable.”

Crowder plans to continue to push for a more understanding community. The reporter is beginning a new series to “give a voice to the voiceless, possibly literally.”

“There are so many subcultures in our community that need a voice,” Crowder said. “While the transgender in Iowa series is over, I still plan to keep up with the people I learned so much from, and hope to continue growing our relationships in the future. I am indebted to those who helped me learn and grow as a reporter and community member.”

**By Madison Tuttle and Amanda Wymore**